Beagle Bay is the gateway to communities further north such as Djarindjin Community, Bobeiding Community and Ngardalargin.

The community was established by Trappist monks around 1890. Beagle Bay has a history of caring for stolen children. In 1884, the first ever priest arrived to serve the Catholics in the Kimberley to try and convert the Aboriginal people. Bishop Matthew Gibney founded the Beagle Bay mission, developed in the land of the Nyul Nyul people; this became a site for the Aboriginal people in 1890. In 1901, Pallottine Fathers from Germany took over the Beagle Bay Mission with two priests and four brothers. In 1907, the St John of God Sisters began to run a mission school at Beagle Bay and in 1918 the famous church was opened. It features a pearl shell altar which is now a tourist attraction. The Beagle Bay Mission subsequently became home to Indigenous people from across the Kimberley and further afield. Lawman and artist Butcher Joe Nangan lived and worked at the mission from around 1920 to the 1960s.The Aboriginal community gathered vast amounts of shell from the beaches, and more than 60 thousand bircks went into the building. The church was finished in 1918.
The ceiling was plastered and decorated with shells to represent stars and the original roof was made from tree boughs and brush, until the termites ate it. Flattened kerosene tins were then used. Today it is corrugated iron.
It is the high decorative altar that stands out for its beauty, simplicity and devotion. Hundreds of mother of pearl shell were laid into the plaster, and they glisten with a soft, silvery glow.
Father Thomas Bachmair was the driving force behind the building of the Beagle Bay Church, but within two weeks of its conscreation he died of scepticaemia. His funeral was the first to be held in the new church.
The 12 metre bell tower was a later addition during the 1920s. There is the original bell from the Trappists, and two others that were a gift from a German parish
The com 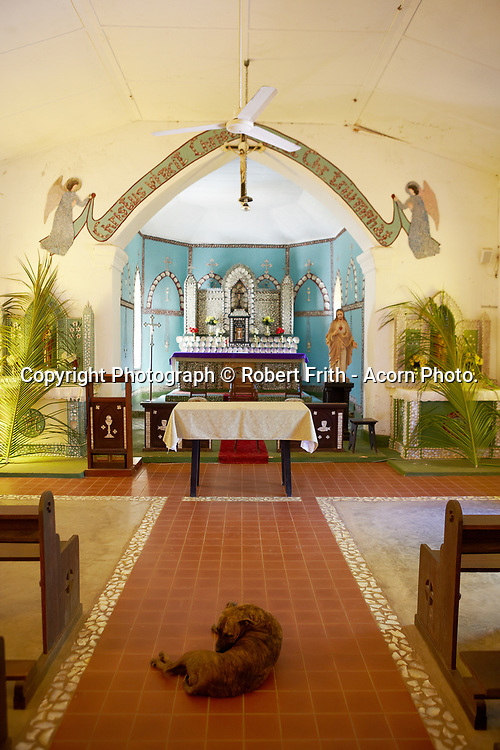